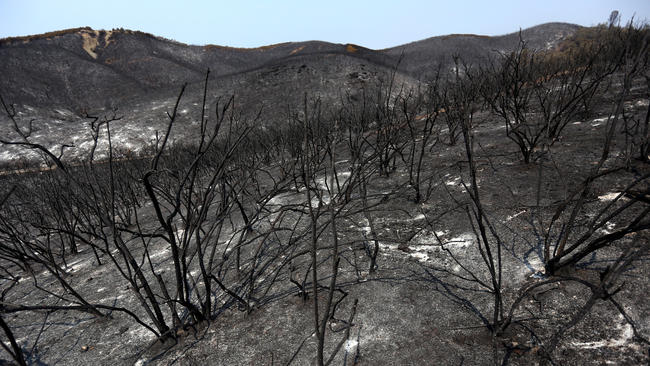 N. CALIF – A Forest Service firefighter was killed Saturday night battling a wildfire near Lake Tahoe, becoming the second firefighter to die in just over a week.

Michael Hallenbeck, 21, from Shingle Springs, California, was killed fighting the Sierra fire when a tree fell on him. Another firefighter was injured.

On July 30, 38-year old Dave Ruhl was killed while scouting a blaze in Modoc County, near the Oregon border.

There are more than a dozen fires continuing to burn across Northern California.

The largest of them, the Rocky fire, has consumed nearly 70,000 acres and was 85% contained as of Sunday night, state fire officials said.

Hundreds of people who fled their homes as the erratic Rocky fire spread have since returned to their communities to find devastation in the blaze’s wake.

The massive fire destroyed 43 homes and 53 outbuildings, and eight structures were damaged as it quickly spread across Colusa, Lake and Yolo counties.

More than 3,500 firefighters have battled the blaze, which started July 29 and is burning north of Napa.

Fire officials are concerned about pockets of intense heat that remain within the containment area. Fire activity, they say, may increase as humidity drops and temperatures rise again.

Thunderstorms overnight did not affect the Rocky fire, according to the National Weather Service.

A red flag warning, however, remains in effect throughout Northern California, where gusty winds and dry fuels increase the fire threat.

HIBBING, Minn. — A retired fire captain and his wife have died after trying to rescue their grandchildren from their burning home. […]

In its annual report published Monday, the National Fire Prevention Association (NFPA), 60 U.S. firefighters died while on duty in 2017, which […]

LOS ANGELES, CA – A Los Angeles firefighter died Monday morning, two days after he fell from an aerial ladder during a […]